If you are a tattooer, or just have tattoos, you will be inevitably asked, "Does it hurt?".  While this may seem like a ridiculous question (of course it hurts!), it should not be surprising that it would be asked. According to a survey taken in 2012, only 21% of the people in the United States have a tattoo. That means that if you have a tattoo, you are likely to encounter four people who have no clue what the experience of getting a tattoo is like. Given the taboos still associated with tattoos, the rise in cultural awareness and interest in tattoos, and the conflict that arises in a person's mind when they consider that someone willingly endured pain for the sake of adornment, those four people should be naturally curious.

The initial question, "Does it hurt?", is typically just an ice-breaker. The real question on the non-tattooed person's mind is, "What does getting a tattoo feel like?". The problem is that the experience of getting a tattoo is unique. While the pain can be compared to other common experiences in order to provide some context, ultimately any description falls short of the actual feeling of getting a tattoo.

In medical terms, a tattoo is a wound, more specifically an abrasion. Though nothing is scraped away by the tattooing process, the damage is superficial, going no deeper than the epidermis. Many people have experienced skin abrasion. The difference between that an a tattoo is that normally the abrasion happens suddenly, while a tattoo is a drawn-out process. The immediate pain of a tattoo is less significant than most people imagine, but the prolonged sensation of that pain is often not accounted for.

The tattoo process involves a configuration of needles (typically) repeatedly perforating the epidermis of the skin. Another experience common to most every is being stuck with a pin or needle. That sensation is often far worse and more damaging than the immediate pain caused by a tattoo needle; more often than not such injuries are more grievous than what a tattoo needle causes. Being stuck by a pin or needle may draw blood, while a tattoo needle should never go deep enough for that to happen. Again, the difference is that the tattoo process is repeated at over 100 cycles per second, while the more common experience is (hopefully) only one perforation.

It is not uncommon for a person getting their first tattoo to report that the experience was not nearly as bad as they imagined. This is also reflected in the fact that those who get a tattoo often will get more than one. The sensation is no longer a mystery or source of trepidation. Yes, you may need to occasionally grit your teeth or clench your fist while getting a tattoo, but it is likely that you have experienced far worse.

The next question about tattoos and pain will inevitably be about what location hurts the most or least. It should be kept in mind that every person experiences and processes pain in a different manner. Some have a greater pain tolerance than others, while others are more or less sensitive in some areas. Some even find getting a tattoo pleasurable. One of my earliest tattoos was in a spot within the client's pantie-line, and at one point she interrupted the procedure because she was having an orgasm. This was most likely due to the vibration of the machine near a sensitive area, but it demonstrates that the pain from the tattoo was not so great as to overcome other biological responses to stimulation. 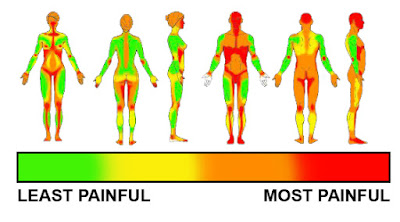 Given that we each have different experiences with pain, any guide to what will hurt more or less should be considered anecdotal. There are, however, some commonalities to consider.

How much tissue is between the skin and the bone?

Tattoos that are in skin that has less tissue, fat or muscle, between the skin and the bone tend to be more painful. This is most likely because there is less cushion to resist the impact of the needle. Hands, feet, knees, collar bones, and the sternum are all typically more sensitive areas. The spine is often doubly so, due to the increase in nerve fibers and the bone being closer to the skin. The head, with very little tissue between the skin and skull and increased sensitivity, may be the most extreme example of this condition.

How ticklish is the spot?

The more responsive an area is to stimulation, the more painful tattooing that area may be. Even if you are not generally ticklish, areas of the body that are less exposed to stimulus tend to be more sensitive, and thus more pained when tattooed. The inside of the arm is more painful (typically) than the outside. The inner thighs are painful areas, as are the sides of the torso (or rib-cage... bones!). Add to these areas any inner bend on the body; back of the knee, crook of the elbow, the armpit, bottoms of feet, palms of hands, and especially the neck/throat.

What is the condition of the skin?

Skin that has been damaged in the past is often more sensitive than skin that has not been damaged, though this is not always the case. Scar tissue can either be more sensitive or less sensitive (or have variations of both throughout to scar). Mild but chronic sun-damaged skin can also be more or less sensitive. Surprising to many people is the discovery that previously tattooed areas tend to be more sensitive. While this is expected with new tattoos being touched-up, people are often surprised to feel more pain touching-up or covering tattoos they have had for months, sometimes even years. A tattoo, even when fully healed, is still a wounded area of the skin, and thus more sensitive.

Another concern is the type of work being done, or the phase of the tattoo. Most tattoos begin with line work, tattooing the lines that define the design. A lining needle is a set of needles configured into a point. Most people are more sensitive to this configuration because the needles are perforating the skin in a more concentrated manner. Shading and coloring needles are configured more like a painter's brush, with a wider spread than a lining needle with the same number of needle-points. Shading is often considered less painful both because of the needle configuration and the manner with which a shading needle is used (the stroke tends to be more brush-like and intentionally lighter). Coloring needles, though like the shading needles in configuration, often require more concentration of perforation to achieve a solid color, so is often considered somewhere between shading and lining. However, some report that the shading or coloring is more painful. The reason for this may be that the area being tattooed is more sensitive after the line-work is completed.

While this is something that you no doubt have little control over, which gender takes a tattoo better is often something people are curious about. Women take a tattoo better. I believe that this is the result of biological necessity. Men are very capable when it comes to sudden, extreme pain; being punched, cut, etc. Women, on the contrary, are biologically geared toward enduring pain over long periods of time. The tattoo procedure does not cause sudden, extreme pain, but is instead a prolonged irritation, something women are simply better able to handle.

With these conditions understood, the least painful areas to tattoo are those with large tissues masses under the skin, on the outer edges of the body, with skin that is in prime condition. The skin over the deltoid muscle (shoulder), forearms, and thighs tend to be prime tattoo locations. Interestingly, the least sensitive area may be the inside of the lower lip. This is unexpected until you consider the amount of damage the mouth endures; accidental bites, burns, and contact with certain foods. A tattoo needle will cause relatively minimal discomfort compared to what is typically experienced in the mouth.

The pain of getting a tattoo, while not something that can always be shrugged off, is rarely so extreme that it cannot be endured. Prior to getting a tattoo, get a good night's sleep, eat a decent meal a few hours prior to your tattoo appointment, be well hydrated, and be excited about the prospect of a new tattoo! The experience is unique, but shortly after the tattoo starts, you will realize that it is nowhere near as bad as you may have imagined.

Jason Sorrell is a writer, tattoo artist, satirist, artist, and generally nice guy living in Austin, TX.  He loves answering questions about tattoos.  Shoot him an email at https://www.facebook.com/tattoonerdz/
Posted by Jason Sorrell at 7:36 PM

Jason Sorrell
Jason Sorrell is the founder of ArtMonsterATX and a tattoo/graphic artist. I thought I would have something more profound to say here, but it looks like that is it.